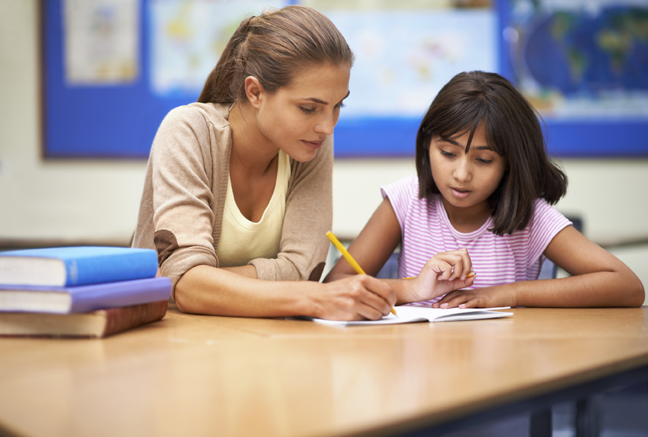 Definition of Cueing and Prompting: Verbal, written, or visual reminders that guide or give direction to students to respond correctly.

Example: Ms. Williams provides appropriate cues and prompts during acquisition and application of new skills and strategies. She provides cues and prompts as students are just learning the Solve It! routine. Later, students will use their Solve It! Student Cue Cards and Master Class Charts to guide them as they practice solving math word problems.

Vignette: Ms. Williams displays the Solve It! Master Class Charts in the classroom. After introducing the cognitive routine (Lesson 1), Ms. Williams proceeds to provide group practice in verbally rehearsing the routine. Using a pointer, Ms. Williams points to “Read” and verbally and visually cues students to respond “for understanding” by saying and pointing to each word “for understanding.” She then points to SAY and cues students in the same way to respond “Read the problem. If I don’t understand, read it again.” She proceeds in the same manner for the remainder of the routine. When students understand the process, she fades the verbal cue and simply uses the pointer (the visual cue) to elicit students’ responses.

During all verbal rehearsal practice sessions, Ms. Williams alternates between using the technique with individual students and groups. Students can then become the prompter for the class to reinforce learning. At the end of the lesson, Ms. Williams distributes the Solve it! Student Cue Cards She invites students to use them as they memorize the Solve it! steps. Read more in Implementing Solve It! A Professional Development Guide for Facilitators (https://www.exinn.net/solve-it/implementing-solve-it-2/).