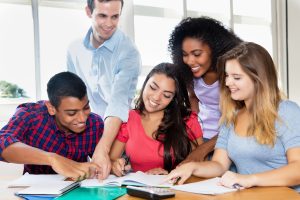 Motivate students to solve math word problems by including their interests in the problems’ stories.

Student motivation can be a challenge when teaching them how to solve math word problems. A major culprit can be the word problem itself.

In general, students often find word problems to be uninteresting and sometimes unrealistic. They often feature unexciting topics, such as buying enough dog food for the number of dogs in a kennel, saving enough money to buy a new backpack for school, buying enough milk for summer camp, and so on. While the goal is to present generic problems so that the largest number of students can focus on math problem-solving aspects, students may not be interested in solving them and thus, not fully engage in solving the problems.

Some students may be put off by the vocabulary; they may not know the definitions for some words or have a limited understanding of the concepts, such as word problems that incorporate scientific terms, contextual nouns, and verbs (e.g., loading corn onto an elevator in a silo); geographic-specific terms (e.g., rafting down rapids or ice fishing in Northern Michigan); and so on. This becomes a problem if students get frustrated when they are unable to read for understanding and just quit reading.

Students also may find little relevance in the problems. For example, a high school student may not care about how much money sixth graders John and Elmore made at their lemonade stand; a student who lives in a rural area may not empathize with the plight of Sophia who needs to add sufficient money to her metro card to get to her destination three stops away.

Motivating students who have difficulty solving math word problems may be even more challenging given that they may avoid problems altogether to protect themselves from failure.

Traditional motivational strategies can help students succeed at solving whatever problems they are given. However, teachers may want to increase student motivation; one strategy is to write story problems that include student interests.

At a basic level, teachers can change the word problem by substituting actual student names and interests. Here’s an example of a standard one-step word problem from Solve It! Teaching Mathematical Problem Solving in Inclusive Classrooms Grades 5–6:

Let’s say that the sixth-grade teacher, Ms. Clark, wants to personalize the problem for her students. This week marks the beginning of Girl Scout cookie sales. Two of her students, Camilla and Chloe, are very active in Girl Scout activities and have gotten the rest of the class excited about two new cookie flavors this year. Ms. Clark decides to change the problem to reflect their interest.

Note, that in the first example, the changes are basically replacements. In the second and third examples, Ms. Clark introduces a little more interest by suggesting that the girls are in competition to sell the most cookies (which they are) or by giving students a chance to weigh in on which cookie flavor they would choose.

If teachers do not want to use student names, they can substitute popular celebrities and musicians. For example, they might change the pronouns to current fan favorites such as:

Other examples of high-interest topics that can be tapped when rewriting math word problems include:

Another instructional strategy is to have students generate math word problems. Pair students or form small groups of three to four students and have them write a math word problem that includes group members. Set norms and rules to ensure that topics are appropriate and that all feelings are respected; in other words, no person’s feelings get hurt while writing the problem.

A variation of this strategy is to have one student group write a problem for another student group. In this scenario, you might want to add a few criteria, such as use all group members in the story problem, make the story topic something that at least one group member likes (e.g., sports, music), and so on.

Another variation might be to use Group Story Writing (for a description of this instructional technique, see the Exceptional Innovations blog at https://www.exinn.net/group-story-writing-helps-students/). Introduce the first sentence and then have individual students add to the problem. Scribe the problem as it is being developed. Ask students to solve the problem. Then begin writing a new group story problem.

Always leave time for students to solve these problems and share the steps they used in solving them.

When rewriting math word problems, it is important to know the number of steps required to solve the problem to ensure that those assigned to students are appropriate. The Solve It! third edition and autism versions (https://www.exinn.net/job-related-social-skills/) both include a variety of additional one-, two- and three-step math word problems. Use these problems as a basis for rewriting the story to fit students’ interests.