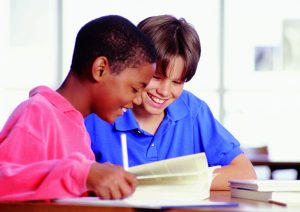 Built into the Solve It! instructional approach are two steps—read (for understanding) and paraphrase (in their own words)—that support students who have difficulty reading.

How would your students answer this math word problem*?

An hour after Big Country Grocery opened, Gloria arrived in the parking lot. It was 8:00 a.m. and Gloria needed to buy a bag of dog food for her new puppy, Ruby. As Gloria made her way toward the store’s automatic sliding doors, she was surprised to see so many people coming from the store toward her. First, there was a man dressed in a business suit with five children. Each child was eating an ice cream cone, which Gloria thought was odd at this time of day. But she had to admit, the ice cream looked yummy. Following them were three women who each had a stroller with a child in it happily eating a chocolate chip cookie. The women were talking loudly about the great deal on the cookies that they had just gotten. Gloria stepped aside to let a young man in a Big Country Grocery store tee shirt come out of the store carrying two bags for an elderly couple, who strolled smiling, arm-in-arm behind him. Gloria overheard the couple discussing how the cinnamon coffee cake they had just bought would be a perfect mid-morning snack with a cup of green tea.

When Gloria returned home, her husband asked her what took so long since she was only going to buy a bag of dog food. As Gloria pulled out a gallon of ice cream from her shopping bag, she said, “Well, I saw this family eating ice cream and I thought it looked so good, I had to buy some.” She then pulled out three bags of chocolate chip cookies. “When I saw these adorable children happily eating cookies and heard their moms bragging about how much money they had saved because the cookies were on sale, I could not resist stocking up on them too!” Finally, she pulled out a coffee cake and box of tea bags. “And, there was this sweet couple who were looking forward to eating cake with their tea and I thought you and I might try it too.”

Gloria’s husband looked a little confused. “So, how many people in total did you see going into Big Country Grocery with you?”

This rather long, trick math word problem illustrates the importance of carefully reading and comprehending a math word problem. Many students will answer fifteen and not understand why the actual answer is zero. They would have calculated the number of people Gloria observed, did the math, without realizing that the problem asked how many people went into the store with Gloria. They would not have read and reread carefully to identify the problem.

Students who have poor reading comprehension also tend to have difficulty solving math word problems. Built into the Solve It! approach are two initial steps that directly address reading.

As part of the Solve It! approach, students learn various reading strategies that will help them understand the math word problem. Examples follow.

Learn More About Solve It!

Much has been written about Solve It! in research and professional literature. A summary of the research base can be found at https://www.exinn.net/wp-content/uploads/2015/10/Brief-on-SolveIt-Research-4-Web.pdf.

Find more information about the different Solve It! packages at https://www.exinn.net/solve-it/.